The use of gene reporters such as luciferase permits highly sensitive and nondestructive monitoring of gene expression. Firefly luciferase, a 61 kD monomeric protein, is especially attractive to many researchers because of its high sensitivity, wide linear detection range and extremely low background due to the absence of endogenous luminescent activity in mammalian cells. For the increasingly popular assay using luminescence microplate readers, the high-throughput compatible “glow” assay is often preferred for batch processing of multiple plates. In this application note, we demonstrate the measurement of luciferase expression in CHO-K1 cells using the SpectraMax®Glo Steady-Luc™ Reporter Assay Kit, which affords longlasting luminescence signals. This assay kit is optimized for the SpectraMax®i3x Multimode Microplate Reader with a preconfigured protocol in SoftMax®Pro Software for rapid data analysis.

The SpectraMax Glo Steady-Luc Reporter assay has a simplified workflow. The working solution is mixed at 1:1 ratio with the medium in each well of the microplate, where cells expressing luciferase are plated. The plate is then covered and mixed to allow complete cell lysis before the luminescent signals are read on the SpectraMax i3x Multimode Microplate Reader (Figure 1). The data acquisition and analysis is easily streamlined when using the preconfigured protocol in Softmax Pro Sofware.

Part of assay development for a reporter gene assay is to optimize the cell number and amount of plasmid necessary to give a robust signal for screening. A cell dilution assay was performed with two different amounts of pGL4.13 firefly luciferase starting in 6-well plates. CHO-K1 cells were transiently transfected with 1.7 μg or 0.8 μg per well of pGL4.13[luc2/SV40] vector, which encodes the luciferase gene luc2 under control of the SV40 early enhancer/promoter, or pGL3-Basic (control) vector, which lacked promoter and enhancer sequences. After 24 hours, cells were trypsinized and seeded at 100 μL/well into a 96-well plate starting at 30,000 cells/well with subsequent 2-fold dilutions. 100 μL/well Steady-Luc working solution was added to the wells. The plate was covered to protect the reagents from light and mixed using an orbital shaker. After 10 minutes, luminescence was measured and recorded on the SpectraMax i3x reader using the preconfigured SpectraMax Glo Steady-Luc Reporter assay protocol. The preconfigured protocol is found in the Reporter Assays section under the Protocol Library Tab or on the SoftMax Pro Software protocol sharing website (www.softmaxpro.org).

A reporter gene assay screen was simulated by performing multiple reads of a plate of pGl4 firefly luciferase transfected cells using the SpectraMax Glo Steady-Luc Reporter Assay Kit. Cells were transfected as previously described and plated at 30,000 cells per well in a 96-well plate and grown overnight. On the day of the assay, the plate was equilibrated to room temperate, and then 100 μL reconstituted Steady-Luc working solution containing D- Luciferin was added to each well. The plate was covered and mixed on an orbital shaker for five minutes and then placed In a SpectraMax i3x reader and mixed. Luminescence was read every five minutes for a total of five hours with three seconds of orbital shaking before each read.

For comparison, the standard curve to identify the detection range of the assay was also performed with a competitor’s glow luciferase assay. In both cases, the assays identified a linear relationship between luminescence and luciferase concentration (Figure 2). The R2values for luciferase were 0.998 using the SpectraMax Glo Steady-Luc Reporter Assay Kit and 0.999 using the competitor assay kit. A paired t-test of normalized data indicates equivalent results at each concentration (P < 0.05). Calculations were performed using GraphPad Prism. Using both kits, the Lower Limit of Detection (LLD) of luciferase was 5 femtograms/well in 384-well format. 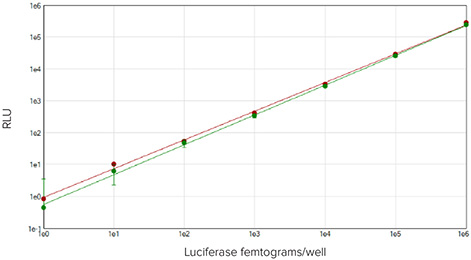 Figure 2. Luciferase standard curve in 384-well format.Linear results from a 10-fold dilution of purified luciferase in either the SpectraMax Glo Steady-Luc Reporter assay (Green) (R2=0.999) or a competitor assay (Red) (R2=0.998). In both assays the LLD=5 femtogram/well.

Measurement of luciferase in transfected cells

The SpectraMax Glo Steady-Luc Reporter assay is a glow-based luminescence assay that provides an extended signal time window (Figure 4). A plate with luciferase expressing CHO-K1 cells at 30,000 cell/well is read every five minutes to simulate batch processing of screening plates. At five hours, the signal is within 20% of the initial value. On each individual plate in a reporter assay screen, a control for normalization of data to background is included so that data can be compared across many plates. As demonstrated in Figure 5, the signal stays within 15% across 20 plates, suggesting the feasibility of running 20 plates in a 90 minute period with this assay. 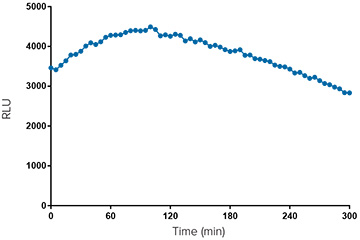 Figure 4. Luciferase signal in CHO-K1 cells over time.CHO-K1 cells were transfected with luciferase. On the day of the assay, the plate was equilibrated to room temperature, and then 100 μL reconstituted Steady-Luc working solution containing D-Luciferin was added to each well. The plate was covered and mixed on an orbital shaker for five minutes and then placed in a SpectraMax i3x reader and mixed. Luminescence was read every five minutes for five hours with three seconds of orbital shaking before each read. 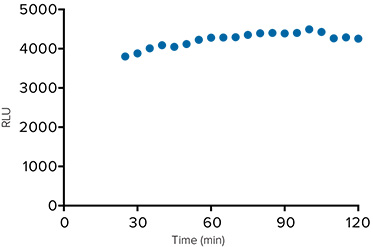 Figure 5. Screening applications.Raw data from luciferase transfected CHO-K1 cells in the SpectraMax Glo Steady-Luc assay. The average signal from the luciferase transfected cells is plotted as an example of batch processing during a screening assay in which a plate is read every five minutes. On screening plates, background controls are used to normalize data so that comparisons can be compared across many plates.