The history of ELISA from creation to COVID-19 research

Over the past three decades, ELISA or enzyme-linked immunosorbent assay, has become vital to many areas of research and has shown to have many applications—from detecting food and environmental contaminants to screening for HIV and SARS-CoV-2 (COVID-19) antibodies

ELISA is a method used to quantitatively detect an antigen (i.e., toxin or foreign substance) within a sample. Most ELISAs are run on microplates, with the bottom of the microplate serving as the solid surface to which an antigen of interest attaches either directly or via an antibody. ELISA microplate readers are typically used by researchers to read and analyze multiple plates simultaneously and obtain accurate ELISA measurements at high throughput.

So how did it all begin? Here, we explore the origin of ELISA and how it has evolved over the years to contribute to some of the most significant scientific breakthroughs of our time. 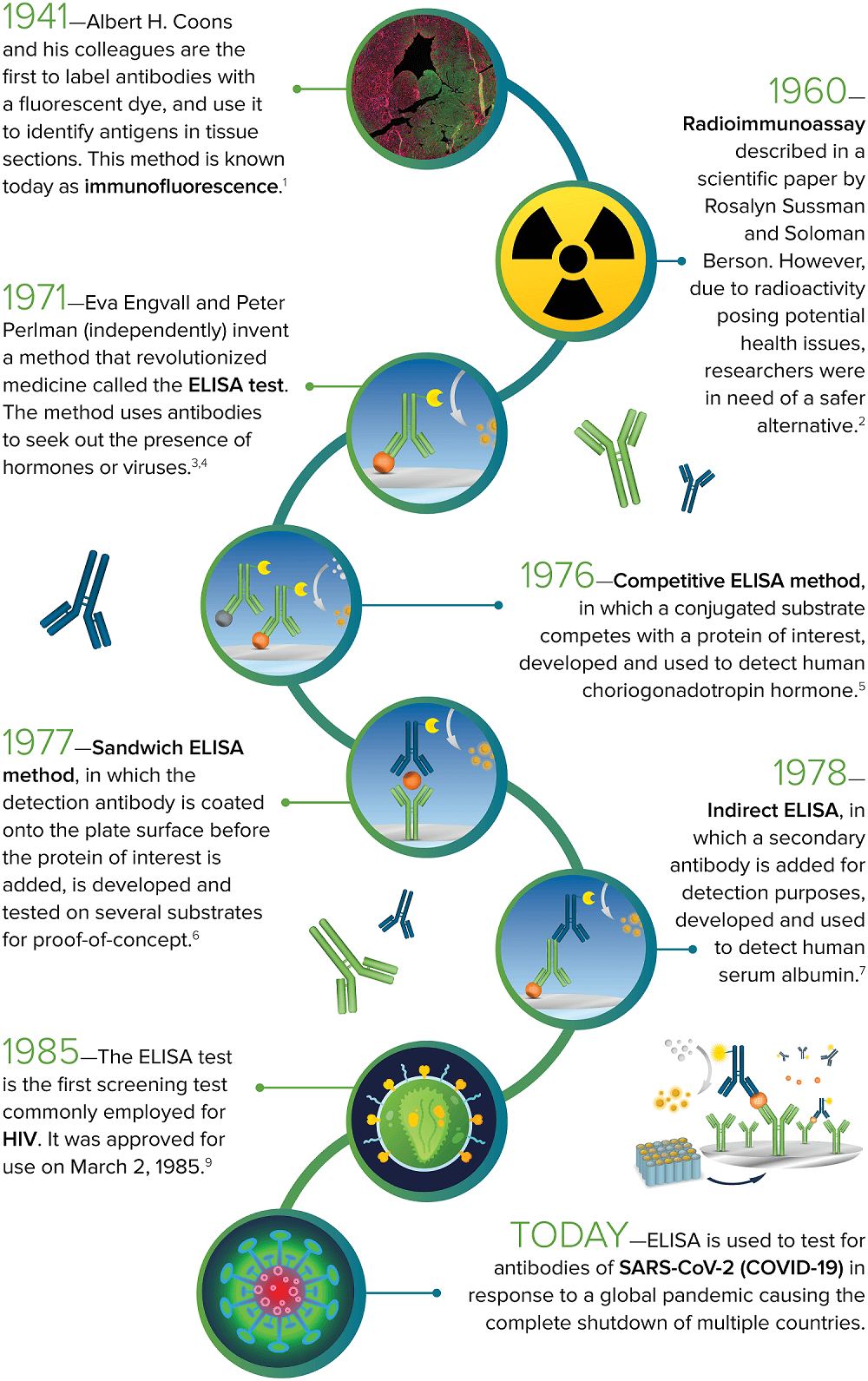 1941 – Albert H. Coons and his colleagues are the first to label antibodies with a fluorescent dye and use it to identify antigens in tissue sections. This method is known today as immunofluorescence.1

1960 – Radioimmunoassay is described in a scientific paper by Rosalyn Sussman and Soloman Berson. However, due to radioactivity posing potential health issues, researchers were in need of a safer alternative.2

1971 – Eva Engvall and Peter Perlman (independently) invent a method that revolutionized medicine called the ELISA test. The method uses antibodies to seek out the presence of hormones or viruses.3,4

1976 – Competitive ELISA method, in which a conjugated substrate competes with a protein of interest, is developed and used to detect human choriogonadotropin hormone.5

1977 – Sandwich ELISA method, in which the detection antibody is coated onto the plate surface before the protein of interest is added, is developed and tested on several substrates for proof-of-concept.6

1978 – Indirect ELISA, in which a secondary antibody is added for detection purposes, was developed and used to detect human serum albumin.7

TODAY – ELISA is used to test for antibodies of SARS-CoV-2 (COVID-19) in response to a global pandemic causing the complete shutdown of multiple countries.

Learn more about the different ELISA techniques, its various applications, and the plate reader and software needed to conduct an ELISA assay. View ELISA solutions page.

It was another great year at ISSCR 2022! Leaders from across the globe…

An automation journey for a high-throughput ELISA workflow

As your lab’s needs expand, automating every step of an intricate workﬂow…

How automated organoid cell cultures are developed, imaged, and analyzed

The role of Monoclonal Antibodies against COVID-19