In this application note we show how the SpectraMax®i3, SpectraMax®Paradigm®, and SpectraMax®M5e Multi-Mode Microplate Readers are used to perform robust, high-throughput HTRF®assays with excellent Z’ factors and highly reproducible EC50values.

HTRF is a versatile technology developed by Cisbio Bioassays for detecting biomolecular interactions1. It combines fluorescence resonance energy transfer (FRET) technology with time-resolved (TR) measurement of fluorescence, allowing elimination of short-lived background fluorescence. The assay uses donor and acceptor fluorophores. When donor and acceptor are close enough to each other, excitation of the donor by an energy source (e.g., a flash lamp) triggers an energy transfer to the acceptor, which in turn emits specific fluorescence at a given wavelength.

HTRF uses four specific fluorophores that can be combined to form compatible donor-acceptor TR-FRET pairs. The donors are europium cryptate (Eu3+) and Terbium (Lumi4™-Tb) cryptate, whose long-lived fluorescence enables their use in timeresolved fluorescence assays1. Two acceptors have been developed for use in HTRF assays, XL665 and d2. Both have excitation spectra that overlap the emission spectrum of the HTRF donors. Each has an emission peak at 665 nm that falls within a region where the donor does not emit, or emits very weakly. The original HTRF acceptor, XL665, is a phycobiliprotein pigment purified from red algae. A second generation acceptor, d2, is a modified allophycocyanin that is 100 times smaller than XL665 and was developed to alleviate steric hindrance problems that may occur with XL665-based assays.

The HTRF cAMP HiRange kit enables quantitation of cyclic AMP (cAMP, cyclic adenosine 3’, 5’–monophosphate) in cellular samples. cAMP is a key second messenger in G protein-coupled receptor (GPCR) signaling. Upon ligand binding to a GPCR, a conformational change occurs, activating the receptor and in turn activating a G protein. Further signal transduction depends on the type of G protein activated. Activation of Gs leads to upregulation of cAMP by adenylate cyclase. Free cAMP produced by cells competes with d2-labeled cAMP for binding to the anti-cAMP cryptate, so an increase in cellular cAMP leads to a decrease in FRET, which is detectable as a decrease in the fluorescence emitted at 665 nm (Figure 1). 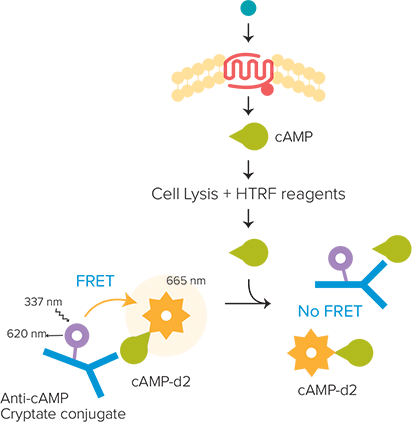 Figure 1. cAMP assayprinciple.Unlabeled cAMP produced by cells competes with d2-labeled cAMP for binding to anti-cAMP cryptate conjugate. Thus an increase in cellular cAMP leads to a decrease in FRET.

The HTRF cAMP HiRange kit was provided by Cisbio Bioassays. cAMP standards with final concentrations ranging from 0.17 nM to 2800 nM were prepared as indicated in the cAMP HiRange HTRF package insert. A positive control without cAMP (maximum FRET) and a negative control without cAMP or cAMP-d2 were included. Reagents were dispensed in a final volume of 20 μL per well as indicated in Table 1.

Table 1. Assay setup for a 384-well low-volume plate. The plate was covered and incubated for one hour at room temperature. Time-resolved fluorescence was measured on the SpectraMax Multi-Mode Microplate Readers (see Table 2 for instrument settings). Both Microplate Optimization and Read Height Adjustment were performed on the SpectraMax i3 and SpectraMax Paradigm readers to ensure optimal assay sensitivity and dynamic range.

Analysis of HTRF assays uses Cisbio’s patented ratiometric reduction method based on the two emission wavelengths detected. Donor emission at 616 nm is used as an internal reference, while acceptor emission at 665 nm is used as an indicator of the biological reaction being assayed. This ratiometric measurement reduces well-to-well variation and eliminates compound interference. Delta F, calculated in step 4 below, reflects signal to background of the assay and is useful for inter-assay comparisons.

Results are calculated from the 665 nm/616 nm ratio and expressed in Delta F as follows:

Z’ factor values were calculated using the negative (no cAMP, no cAMP-d2) and positive (no cAMP) controls2.

Data were analyzed as described above and graphed with SoftMax Pro Softwareusing a 4-parameter curve fit. Best results were obtained with the reader settings indicated in Table 2. When delay time, integration time, and number of pulses were increased, a noticeable decrease in DF % was observed. An increase in assay window from 3020 to 3253 was obtained using a black low-volume 384-well microplate, compared to a white microplate of the same design (Figure 2). However, Z’ factors, which take into account both assay window and standard deviation of positive and negative controls, and EC50values were very similar for both plate types (Table 3). (Note: when using a SpectraMax M5eMulti-Mode Microplate Reader, white plates are required.) 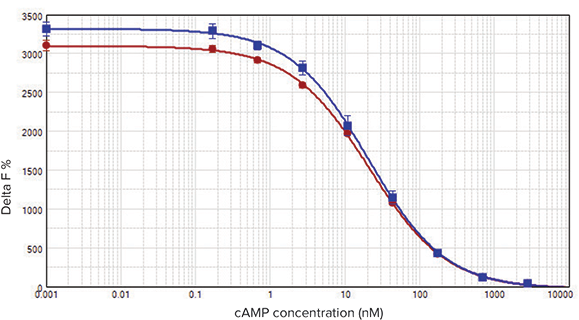 SpectraMax i3 and SpectraMax Paradigm readers produced nearly identical results when compared side by side with the same assay plate (Figure 3). For this test, a white microplate was used. Assay windows were 3004 and 3051, and Z’ factors were 0.92 and 0.90, respectively. EC50values were 19.1 nM and 20.0 nM, comparable to published values (Table 3.) Similar Z’ factors and EC50values are obtained with the SpectraMax M5eMulti-Mode Microplate Reader.

Read time on the SpectraMax Paradigm reader is faster than on the other readers due to its dual PMT configuration that enables both HTRF emission wavelengths to be read simultaneously (Table 3).

The SpectraMax i3 and SpectraMax Paradigm readers can be equipped with an HTRF-certified detection cartridge with high-throughput screening capabilities. When used on the SpectraMax Paradigm reader, this cartridge offers simultaneous dual emission detection that enables faster read times. On all three readers, excellent Z’ factor values for the cAMP HiRange assay demonstrate the robust assay performance of these multi-mode systems. Data acquisition and analysis are simplified using SoftMax Pro Software with preconfigured HTRF protocols.

Compatible with these Molecular Devices systems